Besides being known for its unique tradition and culture, Mongolia was never known for its cuisine. When thinking of Mongolian food, people only imagine hips of meat & fat, and though these were the fundamentals predominantly, there are so much more to try now! Mongolian cuisine should certainly be one of the reasons why you should visit Mongolia.

The Origin of Mongolian Food

Mongolian traditional diet reflects extreme weather conditions and nomadic lifestyle. Food for the nomads was more of a necessity rather than an art. The local nomads would and still spend much of their time outdoors doing physical activities(handling, herding, or milking horses, yaks, camels, goats and sheep) in all sorts of weather conditions. Thus, they needed heavy food that could provide enough nutrition to refill their energy. Plus,the nomads did not grow any vegetables, grain, or rice because they moved regularly and the animals they herd roamed free in the nature, allowing no chance to preserve any sort of crop field. So in the past, the traditional cuisine consisted of meat and fat of any kind(yak, horse, camel,cow, sheep, goat), as well as diary products. Meat was often consumed cooked, steamed or as an ingredient for dumplings and soups, and also as dried like jerky (Borts).

The modern Mongolian cuisine is greatly influenced by Russia and China, the bordering countries, plus other Eurasian countries. It is not that long ago that people started being able to access varieties of grains,wheat, rice, and vegetables. At first, Mongolians would have hard time getting used to eating varieties of vegetables and spices. Now food in Mongolia is as good as it gets- a mix of traditional and modern Mongolian cuisines well blended with Asian, European, and western style dishes. As Mongolia is able to grow or import large number of fresh vegetables, fruits, soya and to-fu, the vegetarian community is growing bigger in Mongolia. So if you are a vegetarian, there is no need to worry about what to eat in Mongolia.

There are many Korean, Indian, Chinese, French, restaurants in the capital city, Ulaanbaatar. The fast food chains like Pizza hut, KFC, Burger King are quite popular places to eat out.People still love to eat the traditional meal as well other foreign dishes.

Below are the top 5 Mongolian traditional cuisine which you should definitely try:

Khuushuur is a fried pastry filled with minced meat, garlic, onion, salt. It could also be filled with mashed potatoes for vegetarians. Khuushuur is the main dish for Naadam, which is one of the biggest traditional holiday in Mongolia. In order to cook Khuushuur, one needs to do the following: prepare a dough(mixing water and flour); roll the dough into circles; place the meat flavored with salt,garlic and onions inside the dough, and fold in half; press or pinch the edges(the pastries should look like a semi-circle pockets); deep fry in oil.

Buuz is quite a similar dish as khuushuur, but instead of being fried at the end, it is steamed.

Buuz has the same fillings and coating as khuushuur, and is widely eaten all year around but especially around February- the time for Mongolian Lunar new year. All families prepare 600-1000 dumplings for the holiday. In contrast to khuushuur, Buuz is made in small ball shape, and usually pinched in different styles with a tiny whole at the top to get more meat juice. 15-25 minutes of steaming should do the dumplings for you.

Khorkhog is like a Mongolian barbecue dish, and put together by cooking pieces of meat and vegetables along with red-hot stones in a pot or container. It is a popular meal for larger groups like family gatherings or special events.

One needs to prepare pieces of meat(plain and ones attached to the bones) in preferred sizes.Then heat up stones in wood fire until they are red-hot. Next, put the meat and the red hot stones in mix, adding salt, spices, and a bit of water(otherwise it will be burnt badly). Vegetables on top of everything and close the lid, and wait for up to an hour. It could also be put on a stove(low-heat), making sure it is fully-cooked.

Tsuivan is a stew consisting of hand-made fried noodles, meat and vegetables. It is probably the most favorite food of Mongolians. If asked what was their favorite food, 9 out of 10 Mongolians would answer "Tsuivan".

Tsuivan is made by the following steps:

1. Preparing the noodles: make a dough, roll in circle, toast the surface of a rolled dough on a stove or pan, spread oil, cut in small pieces

2. Preparing the stew: cut the vegetables(cabbage, carrot, pepper, potatoes) and meat(boneless) in thin and narrow pieces, take a pot and toast some onions in an oil, add the meat and stir, add the vegetables and salt or other spices, and stir for up to 10 minutes. Then add water that covers 75 percent of what you have been stirring, put the noodles on top, close the lid and steam for 15 minutes on a low-heat. Once ready, add some oil and mix everything well together.

Mongolian cuisine is hard to imagine without the different types of soup. The most common soups are Banshtai shol/Dumpling soup, Guriltai shol/ Noodle soup, Rib soup/ Havirgatai shol. The soups are mainly made with noodles, meat(beef & mutton), broth, vegetables, flavored by salt, pepper, onions and garlic. The flavor of the soup usually comes from the meat. Mongolian livestock(horses, cows, goats, sheep, camels and yaks) are not kept in farms, so they travel a long way each day in the pasture, and pick up the most nutritious herbs and plants. Therefore, the meat in Mongolia is very rich and tasty. 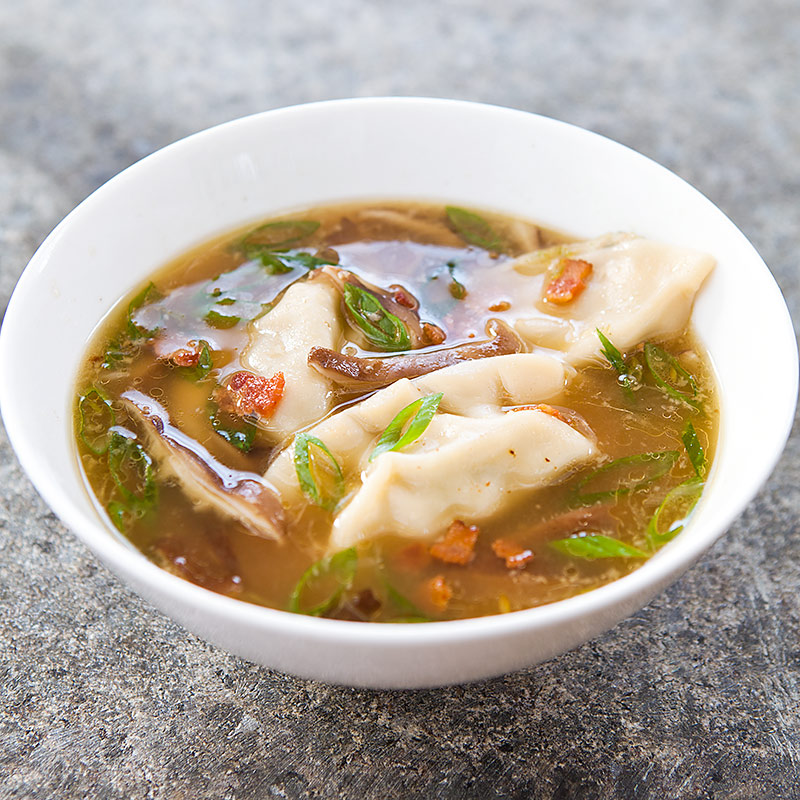 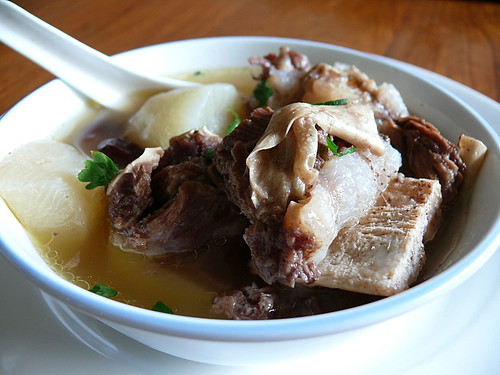