Mongolians inherited such abundant culture (the tangible and intangibles) from their ancestors. The nomadic way of life absolutely shaped Mongolian traditions, customs, holidays, religion and superstitions.

One cannot imagine Mongolians without their passion for music and singing in general. Traditional Mongolian songs often transmit the love for the country, its nature and beauty, especially to the eternal blue sky and the endless steppes. Celebrations in Mongolia always involve singing, and everyone is expected to sing some traditional songs. Singing is like the favorite habit of nomads especially when they travel on horses. The traditonal Mongolian folk long song- Urtiin Duu, the the throat singing- Khuumii, and the musical instrument-Morin khuur are registered in the UNESCO Intangible Cultural heritages. Recently, the Hu, Mongolian heavy metal band, is getting a global recognition by producing songs that combine the traditional throat singing with modern music.

For the Mongolian nomads singing Urtiin Duu is a way of talking and connecting to the features of their motherland. That is why it has less words but more prolonged tones to reach as far as it could be heard. It embraces a comprehensive nature of all national traditions and customs, including history, culture, aesthetics, ethics and philosophy.

Khuumii- The overtone- singing or throat-singing

Khuumii is a type of sound art which is believed to be so old that researchers struggle to indicate its time of origin. The term "khuumii" is described in many forms. Some say it means to imitate a sound. It is believed that Khuumii was originated in the Khovd, Uvs provinces of Mongolia. Mongolians' custom of admiring the nature has played a major role in creating Khuumii in the first place. Mongolians recharge their energy and power from the features of earth, and so they not only imitated the sounds of earth but found a way to penetrate into the essence of the world. Khuumii is a result of unusual throat singing ability as well as the sense of pure sound art.

Morin khuur is one of the most important heritages of Mongolia. The head of the musical instrument is carved in shape of a horse head, and that is why it is named Morin(means horse's in Mongolian) Khuur(fiddle). The instrument consists of a trapezium wooden-framed sound box to which two strings are attached. It is held nearly upright with the sound box in the musician's lap or between the musician's legs. The strings are made from hairs from nylon or horses' tails,[2] strung parallel, and run over a wooden bridge on the body up a long neck, past a second smaller bridge, to the two tuning pegs in the scroll, which is usually carved into the form of a horse's head.

Regarded as the original forebear of Mongolian national dances, Biyelgee dances embody and originate from the nomadic way of life. Biyelgee dances are typically confined to the small space inside the ger (nomadic dwelling) and are performed while half sitting or cross-legged. Hand, shoulder and leg movements express aspects of Mongol lifestyle including household labor, customs and traditions, as well as spiritual characteristics tied to different ethnic groups. Biyelgee dancers wear clothing and accessories featuring color combinations, artistic patterns, embroidery, knitting, quilting and leather techniques, and gold and silver jewelry specific to their ethnic group and community. The dances play a significant role in family and community events such as feasts, celebrations, weddings and labor-related practices, simultaneously expressing distinct ethnic identities and promoting family unity and mutual understanding among different Mongolian ethnic groups.

Mongolian fine arts was rather theistic until the 20th century. Religious themes dominated traditional painting and sculpture because these art forms were largely produced within Lamaist temples. Lamaism, the yellow hat sect of Tibetan Buddhism, has been the main religion of Mongolia since 15th century. The Museum of Fine Arts in Ulaanbaatar has an extensive collection of Lamaistic paintings, sculpture, and other religious objects from different periods. Scroll paintings called tanka that depicted the various gods and saints of Lamaist Buddhism decorated every temple. These paintings were both imported from Tibet and created locally by lamas. Tanka came in a variety of sizes and were often painted on cotton or silk. In the post-socialist period, it has become increasingly popular for Mongol families to own tanka and display them in their homes. Under socialism, local artists produced their own substantial body of Soviet-encouraged socialist art, which is less in favor today. 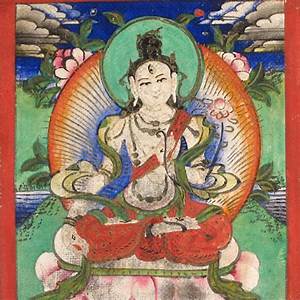 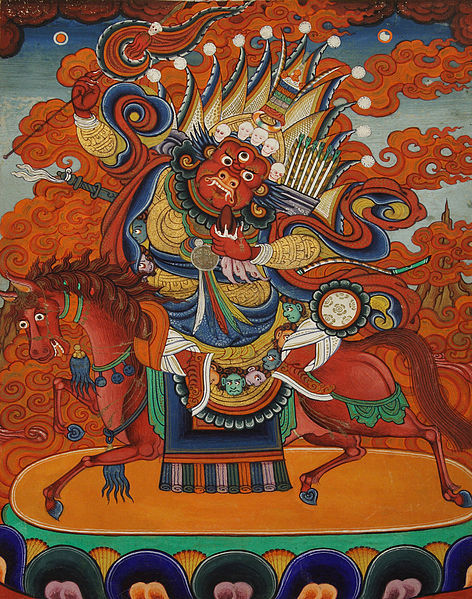 Shamanism is the earliest religious practice of the Mongols. It is stated (in the secret history of Mongolia) that Chingis Khan always used to pray to the sky for 3 days , where his ancestors are believed to exist, before making important decisions like planning tactics for upcoming battles. Some historians claim that the main religion of the ancient Mongols was Tengrism, and not shamanism. These two are fairly similar, but Tengrism is rather monotheistic. It is still debatable whether Tengrism should be accounted as a religion. Historians still research over which one is superior to the other.

Tibetan Buddhism was introduced in 1586 by the Avtai San Khan to Mongolia. After meeting the 3rd Dalai Lama, he thought introducing a peaceful religion like Buddhism should reunite the Mongol subgroups back. Upon his arrival, he ordered to build Erdene-Zuu temple, one of the earliest Buddhist temples in Mongolia. Tibetan Buddhism has four main sects: the blue hat sect, the red hat sect, the white hat sect, and the yellow hat sect. Only two of them were practiced in Mongolia: the red hat sect and most dominantly the yellow hat sect of Buddhism, which is also known as Lamaism.

During the communist purge 1937-1939, 15000 monks were killed and 700 temples were destroyed. Over 75% of Mongolians are Buddhist, 2% of Muslims (Kazakhs in the western Mongolia), 15% of Christians, and the rest are either into Shamanism or atheists.

Deel is the traditional outfit of the Mongolians. Archaeological discoveries found in the Noyon mountain of Bayanchandman, Tov province, Mongolia prove that Mongolians wore deel as early as the period of the Huns (Xiong Nu Empire).

The deel is made fit to the nomadic lifestyle and the harsh weather condition of Mongolia. It is designed with wind tight flap to resist cold and wind, long sleeves to keep the hands warm (especially on horse while holding the rein), and accompanied with a tick sash to support the back(especially while riding horse), and long sleeve boots.

The deel looks like a large overcoat when not worn. Instead of buttoning together in the middle, the sides are pulled against the wearer's body, the right flap close to the body with the left covering. On the right side of the wearer are typically 5 or 6 clasps to hold the top flap in place. There is one clasp below the armpit, three at the shoulder, and either one or two at the neckline.

A deel is traditionally worn with a large sash, usually made of silk or leather belts with large, ornate buckles have become more common in the modern era. The area between the flaps and above the belt creates a large pocket in which Mongolians keep many things, Mongolian men will occasionally even carry silver bowl or cup, snuff box in their deel.

The ancient Mongolians developed a portable dwelling suited to their nomadic lifestyle. It was a long lasting configuration that was easy to build or dismantle. This traditional Mongolian dwelling is called ger, derived from the word "home" in Mongolian. But it is widely known as yurt(from the Turkic languages) in the world. Ger had been invented in various designs before being found in its current form about 3000 years ago. For instance, the kings of the Mongolian empire had their gers permanently erected on carts for ease of mobility(dragged by oxen).

Mongolian nomads had the parts of the ger carried or transported on the backs of yaks, camels, and horses.

Basically, the Mongolian ger is constructed with wood and wool/felt. The wooden structure consists of Uni(slender poles), Toono (wooden compression ring or crown-wheel), Khana (lattice wall), Bagana (columns) and Khaalga ( door and door frame). Felt(Esgii) is used for insulation. Wool pieces are also used as strings or ropes (Hoshlin) to tie parts of the ger.

Although the Mongolian language in Mongolia uses a Cyrillic orthography adopted during the Communist era, Mongolian calligraphy is written in the traditional Mongolian bichig script. In 2013, Mongolian calligraphy was inscribed on the UNESCO List of Intangible Cultural Heritage in Need of Urgent Safeguarding. At present, only three middle-aged scholars voluntarily train the small community of just over twenty young calligraphers. Traditionally, mentors select the best students and train them to be calligraphers over a period of five to eight years. Students and teachers bond for life and continue to stimulate each other’s artistic endeavors. The rate of social transformation, urbanization and globalization have led to a significant drop in the number of young calligraphers